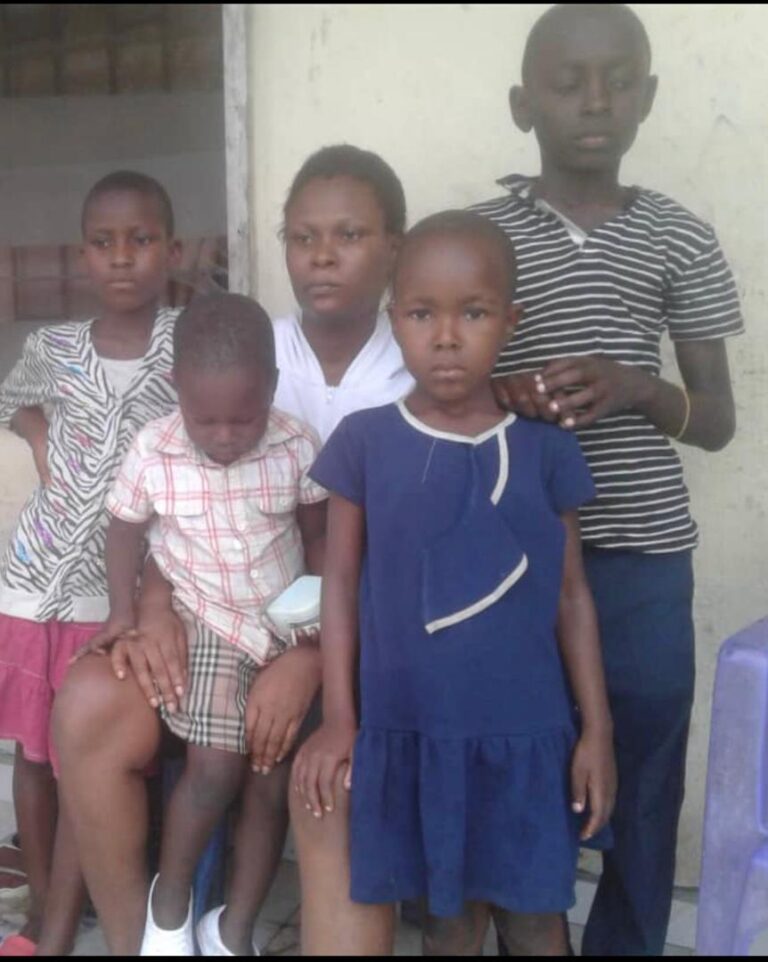 Stranded Woman Cries For Help After Husband Abandons Her, Tries To Kill Their 4 Kids

A 32 year old woman, Ms. Blessing Charles has appealed to members of  the public for assistance for a place to stay and to support her four children – two females and two males.

Ms. Blessing made the appeal when a Good Samaritan picked her from the street in a heavy down pour in the middle of the night and brought her to the CRARN Children Centre, Ikot Afaha, Eket – Nigeria.

Ms. Blessing whose husband chased her and their four children out of the house for months after dubbing them evil, has been moving from pillars to posts looking for shelter and food to sustain  her children who are now out of school.

“I’m a hair dresser but I don’t have a place to stay or to do my work to support my children. My husband threatened to kill me and the children if he ever saw us“ Blessing said.
“Because we were hungry and I took my siblings to ask my father for money, he tied us with ropes and locked in the house. When a neighbor gave us food secretly, he got angry, used machetes and beat, wounded us on the head and neck and warned us not eat her food again otherwise he will kill us…” the first son said.

Given the abuse and bodily injuries on the children, CRARN went with the police for the man’s arrest but he absconded and has since been at large.

Kind hearted individuals who want to support this lady and her four children who now taking refuge at CRARN Children Centre should please, go to here.

left: Sampson in CRARN Center after one week.

One of the seven children who arrived last week.

Update!
Sampson was medically found to be mentally unstable.
He’s one of the seven children who arrived the CRARN Children Centre, Eket last week.
As one of the special need children, a special caregiver has been assigned to him. We are hoping for a better change in his life in a couple of weeks. 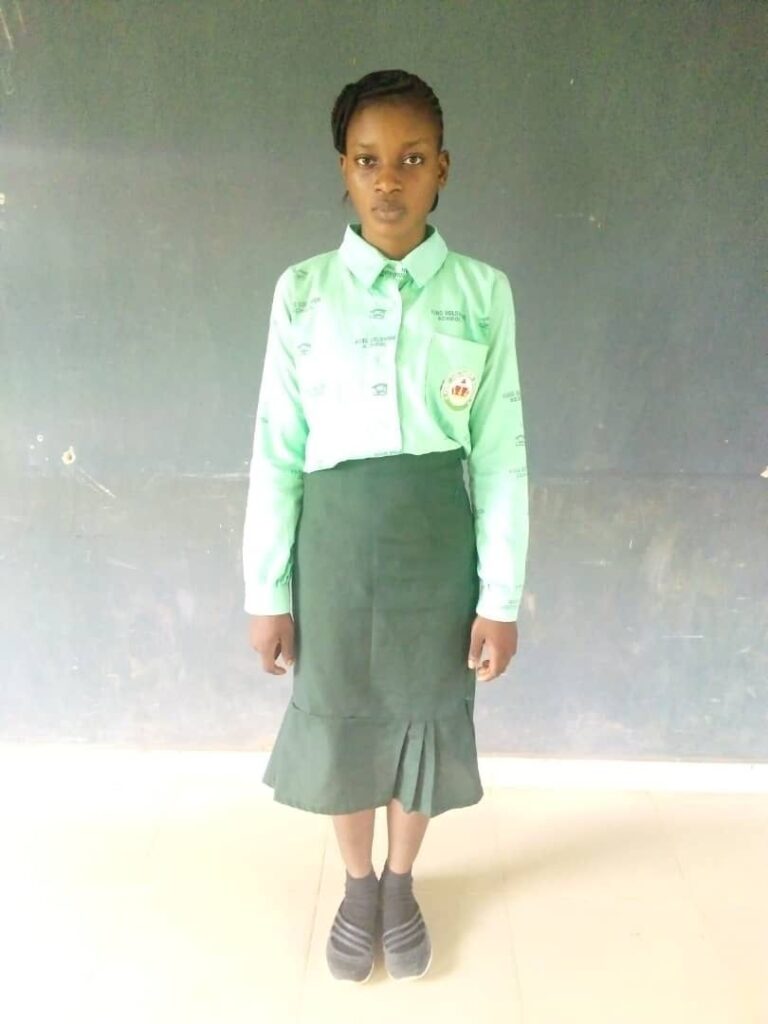 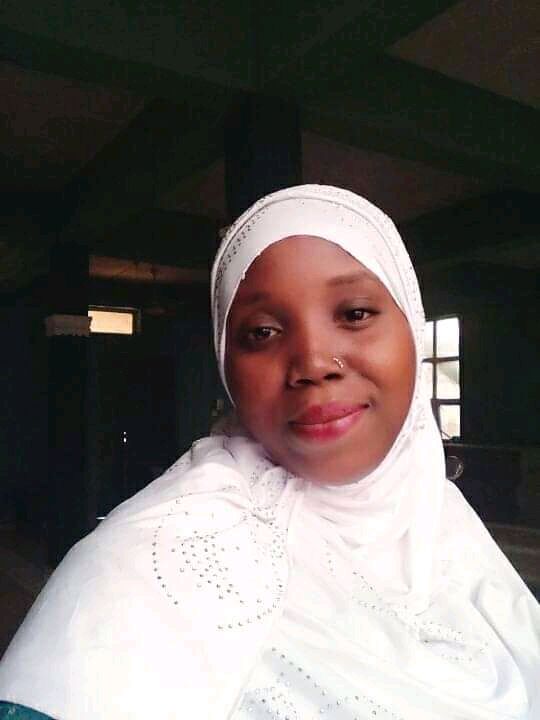 A man in a town called Owode-Egba in Ogun state, Nigeria, Mr. Ilesanmi Ojo Johnson has reportedly kidnapped two teenage girls who are orphans and ages 13 and 15 respectively, and with the connivance of his wife, sold the younger one in Libya for prostitution while he keeps the other as a tool for his sexual gratification.

Mr. Johnson, a surveyor by profession had reportedly tried to lure Miss Opeyemi Oguntade and her younger sister, Miss Waliat Oguntade several times while returning from school to his snare, after they lost their parents; but when that failed, he allegedly approached their step-grandmother and greased her palms to keep a sealed lip while he kidnapped the two sisters and kept in his house.

In a twist of fates, Mr. Ilesanmi Ojo Johnson, allegedly took Miss Waliat Oguntade, 13 and handed over to his wife, Mrs. Aminat Ilesanmi Johnson who now took her to Libya for human trafficking purposes and prostitution while Opeyemi Oguntade, 15 was kept in a dungeon, coerced, brainwashed, and kept as a common law wife by Mr. Johnson.

The ugliest and saddest part is that Miss Opeyemi Oguntade who is on scholarship in King Solomon School and in Senior Secondary 2 (SS2) at Owode-Egba, Ogun State is now suicidal after being put in a family way twice and abortions carried on her twice by Mr. Johnson, is being tortured and held in captivity even with the backing of some community leaders who supposed to be of help to her.

The issue has twice been reported to the police division in Owode-Egba by representatives of the Child’s Right and Rehabilitation Network (CRARN) but no action has so far been taken. Rather, thugs and weapons-wielding fiends have been hired by Mr. Johnson and his fellow hatched men who now go about harassing, haranguing and threatening the CRARN representatives to back down or face their wrath.

Mr. Inspector General of Police, Sir, we strongly solicit for your usual action to rescue Miss Opeyemi whose life is in danger and the return of her sister, Miss Waliat whose life now lies at the mercy of her captors as nobody can tell what is transpiring with her in Libya.

Thank you Sir, for your anticipated prompt action. 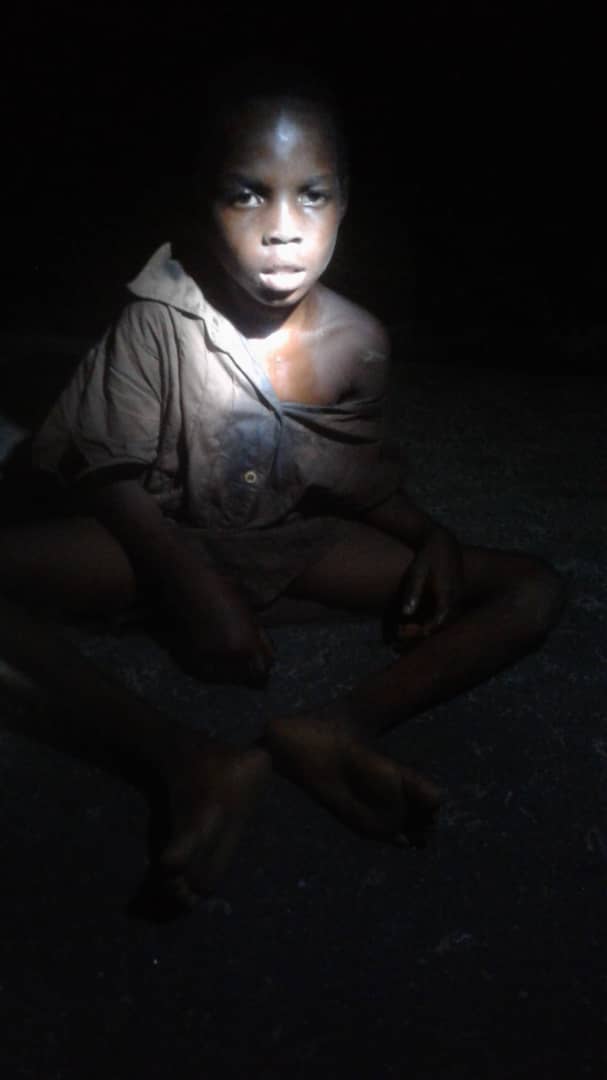 This child was seen wobbling on the streets in the midnight just now and brought to the CRARN Children Centre, Ikot Afaha, Eket.

He stinks with oil extracted from pythons, local palm kennel and olive oil rubbed all over his body.

He managed to say he is from Akai Ubium in Akwa Ibom State and was in a prayer house where he was bathed with hot oil mixed leaves and other concoctions. His ears are stuffed with the concoction which he was also forced to drink to exorcize him of a phantom and flimsy witchcraft spell.

He seems badly exhausted and speaks slowly as if he’s suffocated and has breath difficulty and hearing impairment.

He could not respond to questions and blinks his eyes intermittently with dazed and confused state. He’s about seven years of age and goes by the name Sampson.

That’s is the fate of thousands of children in the Niger Delta region of Nigeria. 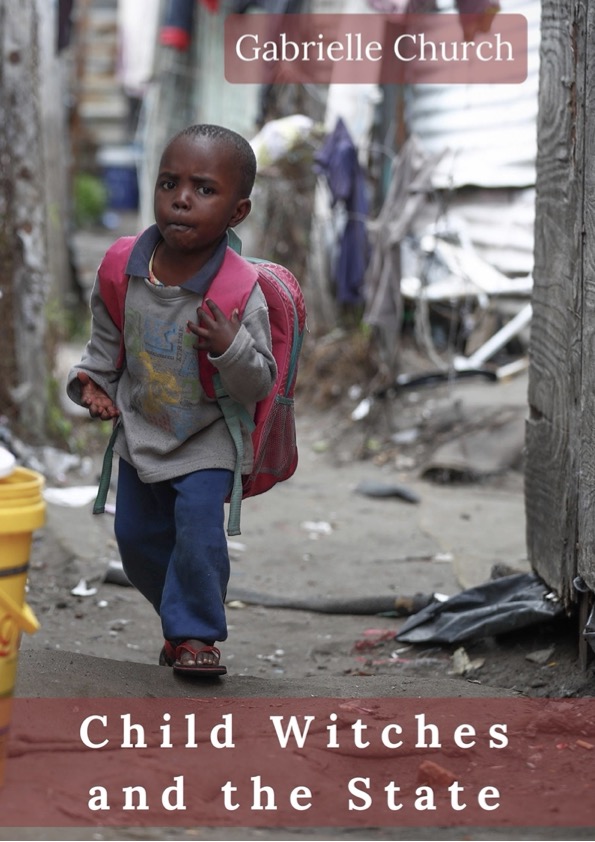 A Multiple Case Study of Angola, Central African Republic, the Democratic Republic of the Congo, and Ghana” 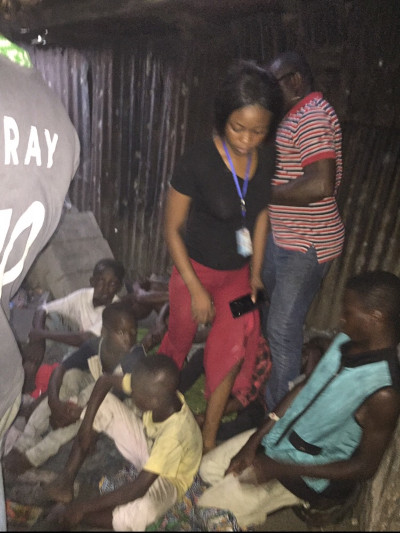 CRARN Rescues 17 Children in one day

The CRARN rescue team got a tip-off about four children who were roaming the streets and frequently had a rough encounter with some hooligans who reportedly manhandled them.

But on arriving to rescue them, we discovered they were 22 in number but five were nowhere to be found including 4 females. The children were found in a very nauseating and deplorable condition which is beneath human habitation. The children said they were all stigmatized as witches and wizards and forced to leave their home through persistent torture and raining of verbal abuses. Majority of them indicated strong interest in returning to school while a few of them said they wanted to learn trade. All the children are of Akwa Ibom origin but from different local government areas. They are also in need of new beddings and mattresses, books, and education materials. 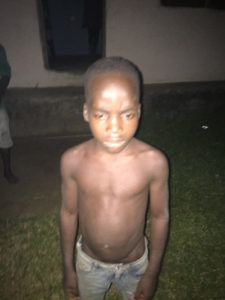 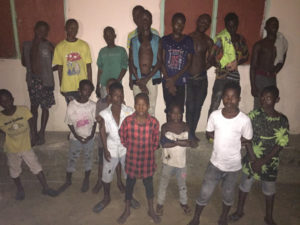 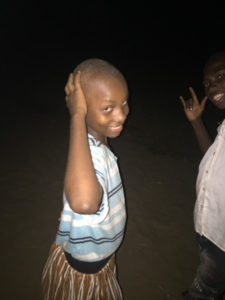